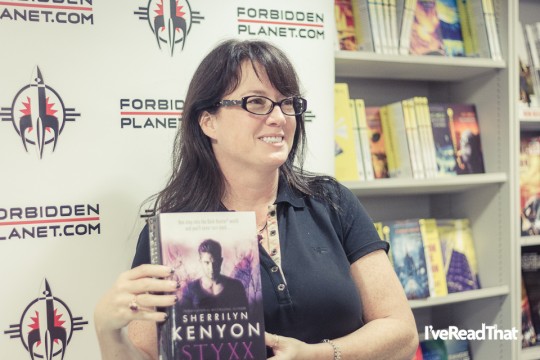 There were squeals of excitement in the Little, Brown office, and across Europe, when Sherrilyn Kenyon announced that she would be coming to the UK for the first time in six years. The Piatkus team were inundated with emails from fans wanting to know where they could meet their favourite author and get their copies of Styxx signed. So, after some very quick London sightseeing, we put Sherrilyn to work!
Our first stop was Nottingham, on Tuesday 10th September, where Sherri gave more than 100 lucky fans at Waterstones the chance to ask her questions about her past and future novels. Bursting into applause when she revealed that there will be Dark-Hunter films coming soon, the audience were quick to ask which actors the lead roles would go to. Sadly, Sherri had to remain tight-lipped and so we’ll have to wait a little while longer to find out who’s up to the challenge of being Acheron.

The next day, we managed to sneak in a quick visit to Nottingham Castle, where we went on the spooky cave tour and ate some fish and chips, before jumping back on the train and heading to Birmingham. Fans had queued around the block in Birmingham city centre for Sherri’s event at Waterstones on the High Street. Despite the fact that it was raining (hard!), many had waited for hours to get their books signed and to have their photos taken. After drying off, some even showed us their incredible Dark-Hunter tattoos!

With no rest for the wicked, we headed back to London the next day. Sherri came into Little, Brown HQ to meet the staff (we played it cool, we promise) and book bloggers at the annual Piatkus party. Then, finally, after one last night in London, Sherri finished her whirlwind tour with a signing at Forbidden Planet on Shaftesbury Avenue.

Here, excited fans had travelled from all over Europe (including Ireland, France, Spain, Portugal, Italy AND Sweden!). In the true spirit of Friday 13th, some fans had even dressed in Dark-Hunter costumes. We probably shouldn’t mention the ones who had skipped school, or the fan that was missing her dad’s birthday… ooops!

It was a hectic four days, but Sherrilyn was delighted to meet so many of her amazing fans and was really touched by the effort everyone went to – especially as it rained for most of her visit! She’s hoping to visit the UK again in the future, so who knows where we’ll end up next time…

Win a copy of Time Untime

Read an exclusive extract from Styxx

Win a SIGNED copy of The Dark Hunters: Infinity Vol.2, The Manga

Ten copies of Born of Silence to be won!

A Bumper Crop of Belador Code Prizes to be Won!